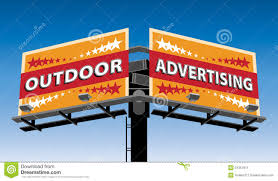 “Outdoor” is one of the few analog advertisement channels that have survived the digital tsunami.

Traditional analog advertising has lost terrain simply because consumers and businesses spend less and less time reading newspapers and magazines and watching broadcast television. When readers and viewers walk away so does the advertisement spending. It simply goes where the readers and viewers go and currently that is to the online media.

The reason that outdoor advertising has not lost out is obviously because we still drive from place to place with nothing else to do in the meantime than look at the traffic and the surroundings.  And that’s when we get exposed to outdoor advertisement.

And it works! We actually do remember those marketing messages that we read on billboards on the highway, at bus shelters and on the side of buses.

The only issue is the cost.

But that is about to change.

Trucks with large poster boards have been around for a while, but the new concept introduced by the Los Angeles startup Zeusvision takes the concept a few notches higher. 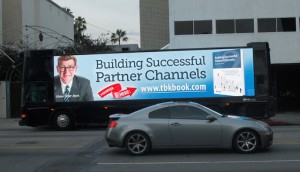 The Zeusvision buses are essentially huge iPads on wheels capable of displaying multi-media messages according to time and location. Zeusvision is including on-board technologies, like GPS, cameras, inertial motion sensors, light sensors, eye tracking, gesture tracking, real-time GPU processing and other tech packages they are still exploring that allow graphics and video to interact with the public in ways never dreamed of before.

Allowing 3rd parties to come up with new ideas and tools for using the “iPads on wheels” Zeusvision will release their Software Development Kit (SDK) and Application Programming Interface (API) in Q1 of 2015.

Customized multimedia messages and experiences will be available for as little as $99.

Going Global on a Shoestring